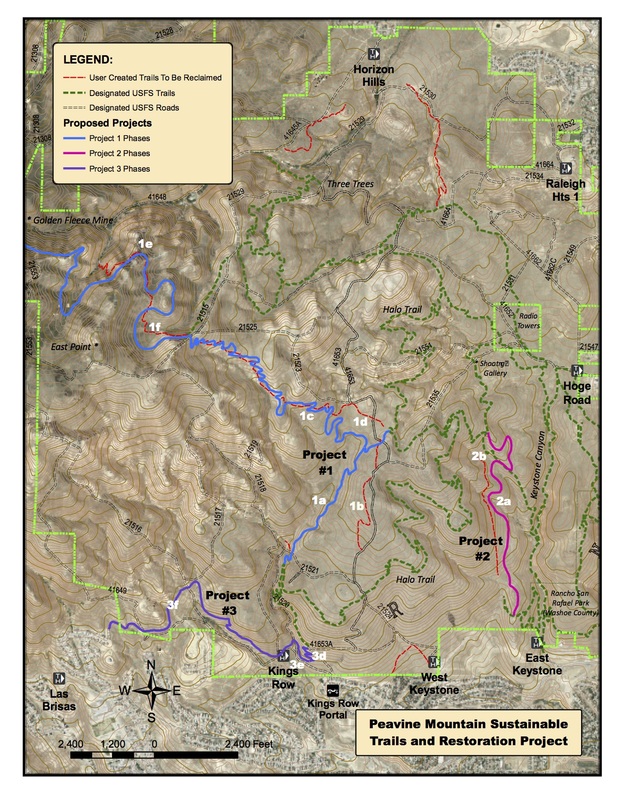 ​We submitted the Peavine Mountain Sustainable Trails and Restoration Project to the USFS in the fall of 2011 and received approval spring of 2013. This was a large project and was divided in three sections.

Project 1 was completed using funds from a 2013 RTP Grant and hundreds of volunteer hours. GBI crews were hired to build new trail and rehab and/or decommission old unsustainable user created trails. Later in the project, our Sutter 300 Mini Dozer was used to cut trail. Due to the efficiency of the Sutter 300 a re-route of the lower part of the Scrub Brush Trail and the addition of the Road-to–trail Over Easy Trail were added to the project. Use of the Sutter 300 reduced the cost of construction so much that even with the addition of the Scrub Brush and Over Easy trails the project was completed under budget. With approval from the grant administrator (Nevada State Parks) and the USFS, the excess grant funds were used for maintenance and repair of problem areas on other existing approved trails in the Peavine Mountain Trail Network. Additionally, more hand tools, rocks, and signage were purchased with the excess funds.

One of the most notable parts of this Project 1 was the re-route/rehab of the user created Beacon Strip Trail. The original trail was unsustainable with many drainage issues; it ran through an area of endangered buckwheat and was not fun to ride either up or down hill. Through Project 1, The Bacon Strip Trail is now one of the best flow trails in the Peavine Trail Network. It has been rerouted away from the endangered vegetation and the old sections of trail have been decommissioned.

Project 2 was the decommissioning of a problem unsustainable user created trail and construction of the extension of the Poedunk Trail providing connection with the Snow Terrace Trail and the East Keystone Trailhead. To complete this project, Kevin Joell rented a Sutter 300 Mini Dozer to cut the trail. The trail was then finished using 100% volunteer labor. It was clearly obvious that the efficiency and economics of using a Sutter 300 to build trail was a game changer.

After finding how efficient a Sutter 300 Mini Dozer was at building need trail, we submitted a successful 2014 RTP proposal to acquire one. Once we received the machine in the fall of 2014 it was used to cut in the 1.73 mile yet to be named trail.  The trail used the Sutter 300 and 882 hours of volunteer labor. The trail connects the Kings Row Trail Head and is intended to connect to the Las Brisas Trail Head, once an easement thought private property is acquired. Additionally, this trail will connect to the City of Reno Urban trails list above.